Definitions: 1. Holy word in meditation: in Hindu and Buddhist religious practice, a sacred word, chant, or sound that is repeated during meditation to facilitate spiritual power and transformation of consciousness; 2. Often repeated expression or idea: an expression or idea that is repeated, often without thinking about it, and closely associated with something [Late 18th century. < Sanskrit, "thought" < man "think"]

Man (= mind) and tra (= tool). A mantra is a unique blend of syllables that create a sacred phrase. Each syllable's sound works on body, mind, and emotions in positive ways. A mantra supports concentration by becoming a focus for the mind.

A mantra is a thought manifest in, or encapsulated by, a sacred utterance that possesses profound spiritual significance. Sound holds a key place in Hindu thought. Some writers believe that it preceded the creation of the universe, and its vibrations are thought to bind the atoms of the world. Mantras are sacred syllables that encapsulate particular forms of cosmic power (Shakti). 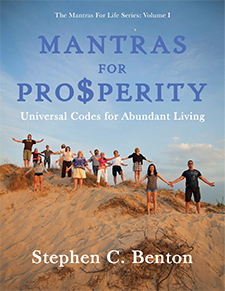